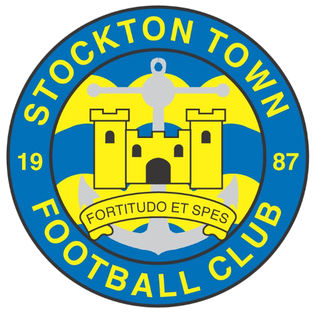 Stockton Town Football Club is an English football club based in Stockton-on-Tees, England. They are currently members of the Northern Premier League Division One East and play at Bishopton Road West, which has an overall capacity of 1,800, including 200 available seats. They are managed by former player Michael Dunwell, who retired from playing in 2014.

Their club badge, which includes their motto, "Fortitudo et Spes" (latin for "Strength and Hope"), is navy and yellow, representing their traditional colours. The historic club nickname, "the Anchors", is taken from the Stockton coat of arms, representing the town's shipbuilding history during the seventeenth and eighteenth centuries.

The club was initially formed in 1979 as Hartburn Juniors, entering a 5-a-side league in Middlesbrough to give youngsters an opportunity to play organised football. The club changed to their name to Stockton Town in 2003.

For the 2009–10 season, a senior team was entered into the Teesside League Division Two and finished in fourth place in their first season. In the summer of 2010, the club applied for membership to the Wearside League and were accepted for the 2010–11 season where they finished in tenth place. In the 2011–12 season, the club finished third in the league and lost in the final of the League Cup.

The club won their first league title in the 2012–13 season, and repeated the feat in their following league campaign, finishing the season with a league record of 104 points. At the end of the 2014–15 season, the club applied for qualification to the Northern League Division Two. However, despite winning the league title for a third time, their application was withdrawn due to legal issues.

In the 2015–16 season, the club won their fourth consecutive league title to gain promotion to Northern League.[] The following season, the club played their first ever FA Vase tie, beating Eccleshill United 2–0, before gaining their most famous victory to date, beating four-time winners, Whitley Bay, 2–0 in the next round. On 15 April, the club won 2–1 at Team Northumbria, to clinch the Division Two title and gain promotion to the Northern Football League Division One.[]

In only their second ever Northern League campaign, Stockton reached the final of the 2017–18 FA Vase. They played Thatcham Town of the Hellenic League. The final, played at Wembley Stadium, took place on 20 May, with Stockton narrowly losing by 1–0. Furthermore, that season's semi-final against Marske United, taking place on home turf and resulting in a 2–0 victory in Stockton's favour, saw the ground record broken, with an attendance of 3,300 (1,800 of Stockton).

In the 2019–20 season, Stockton were leading the table by 13 points with eight games left to play. However, as a result of the COVID-19 pandemic, the Football Association ruled that the entire league would be expunged, with no sides in the league being promoted or relegated, thus denying Stockton promotion despite being top of the league. Representatives from the team and local Member of Parliament, Alex Cunningham, protested against the movement though the ruling stayed in force. After the 2020–21 season was curtailed for the second consecutive season, results from both seasons were combined, which resulted in Stockton Town being promoted to the eighth tier of English football, joining the newly-formed Northern Premier League Divison One East for the 2021–22 season.